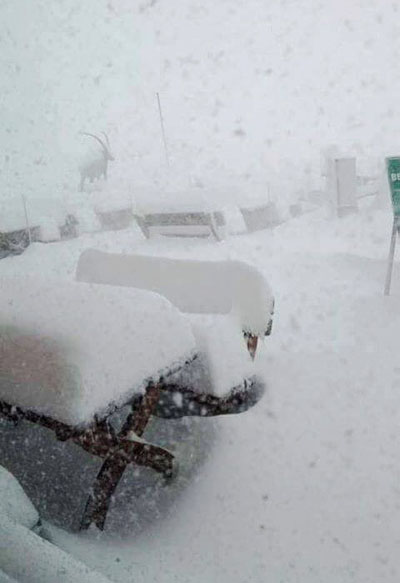 Lots of snow has fallen all over the European Alps.

Now, after a very cold period and some great powder, a warm front has moved in and turned what was fluffy and dry into heavy and wet, at least temporarily.
I know, it feels awful when it happens……..but it’s not tragic, on the contrary, it actually causes the snow pack to stabilize!
We experienced very cold and clear nights so that hoar frost had plenty of time to grow thickly on top of the first snow, fallen at the start of the winter. This hoar frost, because of its curious facet like shape, not like the branching style of the perfect snowflake, prevents the fresh snow to bond with the old layer. If now covered with a massive snowfall and preserved, by continuing cold temperatures, it will eventually serve as the perfect sliding layer for small or big avalanches once they are ready to go!
So this is where a rise in temperatures works wonders! It can help to break down these hoar frost facets and render the snowpack more stable, when the temperatures are getting colder again!
So best is to just let the winter have its way. While we pay attention and read the signs to be safe!
Do it in the snow…T